In the late 60’s, Stephen Karpman, M.D. came up with a way to graphically display destructive interaction that can occur between people in conflict. The Karpman Drama Triangle describes the kind of crazy-making dynamics that we often see taking place in the workplace and in family relationships.
It starts when two people enter into conflict. Two people going at it usually take on the role of Persecutor or Victim without even realizing it. 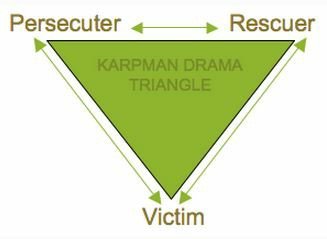 In dysfunctional relationships, people assume the roles, trade places, and never get around to solving the problem(s). Change happens when one or more decide to get off the triangle. – Paul Babin

The Victim: The Victim is of course persecuted, the one who has been “wronged.” The Victim’s stance is “Poor me!” The Victim feels victimized, oppressed, helpless, hopeless, powerless, ashamed, and seems unable to make decisions, solve problems, take pleasure in life, or achieve insight.
People, nations, entire cultures assume these roles switching back and forth from Persecutor to Victim. It’s a dance that can go on for centuries.
It gets even more interesting when a third person, the Rescuer, enters the fray.

The Rescuer: The rescuer’s line is “Let me help you.” A classic enabler, the Rescuer feels guilty if he doesn’t come to the rescue.  Or she satisfies her feelings of self-worth by rescuing. Rescuing adds to the dysfunction: It keeps the Victim dependent and gives the Victim permission to fail. When The Rescuer focuses his energy on someone else, it enables him to ignore his own pain and suffering.

In order for this to work, each person must take on a role. Karpman defined them as: Persecutor, Rescuer, and Victim.

People will hang onto these roles because they experience a twisted kind of self-serving reward in doing so. The unfortunate consequence is that there is usually a larger problem or situation that is not dealt with, because Persecutor, Victim, and Rescuer are putting all their energy into engaging with each other, maintaining their roles, maintaining their position on the Triangle.

And it really gets interesting when Persecutor, Victim and Rescuer change places – in the course of the same argument!

Saying “No!” to the Triangle

All it takes is one of the participants, Persecutor, Victim, or Rescuer to stop the role play – for the system to collapse.  Stopping  means behaving differently, and one of the most effective ways is  by setting and maintaining boundaries.

For example, as soon as the Victim says to the Persecutor, “I will be glad to discuss this when you can speak to me without insults and sarcasm. Until then, I’ll be in the next room,” he is no longer a Victim.

A  Rescuer leaves the Triangle when, for example, he says to the Victim, “It’s not in your best interest for me to defend you in this situation again.  I’m willing to help, but only if you if you stop dating abusive men.”

A Persecutor brings the curtain down on the play when (in a work situation for example) he says something like, “Attacking you and making you wrong is not getting the results I want or need. You’ve got one week to shape up or  I’ll be forced to fire you.

See if you can observe this dynamic playing out in your life. It’s quite sobering when we turn out to be one of the players on the Triangle.