Garry Marshall’s Use of LSD

It’s the day before Thanksgiving, 1998. I’m the “A” camera operator on the movie Runaway Bride starring Julia Roberts and Richard Gere. During the lunch break, the crew stages their own Thanksgiving Day Parade. Per the director’s wishes, each department on the crew has been given the assignment to create a float. The most memorable float is assembled by the onset special effects department. Their centerpiece: a nicely broiled, whole chicken stuffed with small explosives, which they detonate as their float passes the judge and grand marshal, our director, Garry Marshall.

The creative collaboration that is a film production demands strong leadership, the kind that bonds a crew, comforts a cast, and calls forward the best everyone has to offer. When it came to creating connection and community on a film set, Garry Marshall stood above most directors in Hollywood. His key to success was LSD – Laughing, Singing, and Dancing. You can quote me on this. 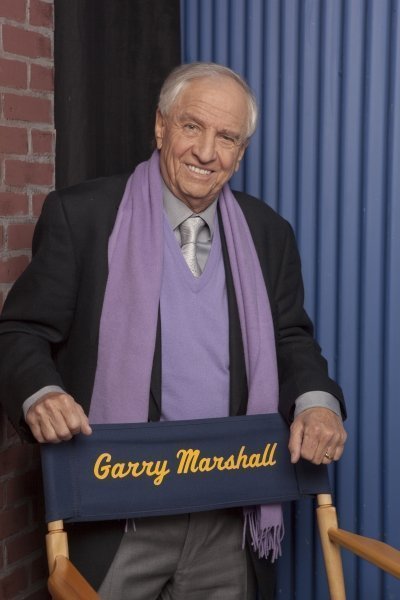 At the heart of Garry’s leadership mastery was laughter. There was a steady stream of it on his set. Nothing bonds a group of people like laughter, it keeps them present, vulnerable, joyous, and connected. Here’s a sampling of the Marshall technique:

Garry had a tradition: everyone on the crew, at least once, got to clap the slate. His editors strung those slates together and put them in the gag reel that was shown at the wrap party. Garry encouraged the slate clapper to be creative with his or her moment in front of the camera. On Dear God, the first picture I operated for Garry, I took very seriously his challenge to be creative with my slate moment.  We were filming in a huge, U.S. Postal Service, mail sorting facility with conveyors and gleaming, metal chutes. I took the slate with me to the top of one of the spiraling chutes. When they yelled “rolling!,” I joined the mail cascading down the chute, arrived at floor level, landed on my feet, said, “marker”, and hit the sticks.

On Runaway Bride, I was bold enough to write a joke the night before, and with camera and sound rolling, tell it before clapping the slate. Pretty ballsy, don’t you think, attempting that in front of one of the most successful comedy writers in the history of entertainment? FYI, they were not rolling in the aisles when I delivered the punch line. And no, I won’t tell the joke here.

On both pictures, at some point during production, a hired actor dressed as a policeman appeared on set and arrested someone on the crew! We camera operators were given advance warning, so we could film it when it happened. The footage was included in the gag reel at the wrap party.

Birthdays were beautiful “I see you” occasions on Garry’s films. On Runaway Bride, my birthday arrived when we were filming on location in Berlin, Maryland. Knowing they “made a fuss” over people’s birthdays, I kept quiet about mine. Toward the end of the day, while rehearsing a dolly shot with Julia Roberts and Joan Cusack, I approached Julia with a question. She stopped me in mid-sentence, “When is your birthday?” She asked it in a kind of “What’s your sign” way. I lowered my voice and whispered, “Well, actually, it’s today, but please keep it under your hat.” By this point in the day, I had thoroughly embraced the idea of a pity party for myself back in my hotel room.

About an hour later, we were nearing the end of a series of takes of Julia and Joan, all of which had been fine.  Garry called out from video village, “I want to do one more!” We did, and for the first 15 seconds, this take was just like all the rest with Cusack entering and asking, “Do you want to go out for a drink tonight?” and Julia replying, “No, I’m going to stay here and get some work done…” Then things got strange.  Julia continued, “…and actually, I’m hoping to go out on a date with Paul tonight, cause it’s his birthday, you know.” At this point, with my eye still pressed to the camera eyepiece, I seriously began to think I was having an acid flashback. Julia and Joan were now looking right into the camera and smiling. Behind them, the prop guys were entering the shot holding two cakes, candles burning, with a contingent of the crew following. Everyone was singing Happy Birthday. With the camera still rolling, my assistant pulled me off and pointed it at me. Across the set, the “B” camera had started filming me. The cakes and candles were placed in front of me, so I could blow. I did. Julia let out a whoop; so did I. She ran up and hugged me. The editors sent me a VHS copy of that footage.

Thank you, Julia. Thank you, Garry, for a very memorable birthday.

It was impossible to sulk on Garry Marshall’s set. He and his people were continually spiking the punch with LSD. On Dear God, we filmed a scene with Greg Kinnear and Maria Pitillo on the stage of the Hollywood Bowl. The final shot of this scene started close on the actors sitting together on the stage floor with the Bowl’s audience seats in the background. The camera then pulled back and went up in the air, ending on a wide shot of Greg and Maria as they began to dance, framed by the arc of the landmark shell.

This was another instance in which we’d filmed a couple of good takes, and Garry announced, “One more!” This time, he came over to me and quietly whispered, “Don’t cut this time. When you get the camera up in the air, lock it in place and keep rolling.” I passed these instructions on to the guys handling the crane supporting the camera, and we rolled. At the end of the scene, per Gary’s instructions, we locked the camera in place and kept rolling. As we did, into the shot of Greg and Maria dancing alone on the stage came Garry, dancing with his first assistant director. They were followed by producers, writers, and department heads. I turned to the grip who had so artfully worked the crane arm during the shot, “Shall we darling?” He said, “Hell, yeah!” Together, arm in arm, we waltzed into the ever expanding, free form, cast and crew, dance extravaganza – all of it captured for posterity and, more importantly, (you guessed it) for the gag reel at the wrap party.

* This excerpt is from my forthcoming book Shooting Myself: Careening Toward Enlightenment in the Film Biz by Paul Babin