Baseball and Lessons On Becoming a Real Man

My son, Elliot, had just turned three. (to hear my reading of this, click here) And I began to consider my fatherly duty to teach him how to be a man. Actually, his mother said, “Hey, it’s your fatherly duty to teach him how to be a man!” I had only a vague notion of what being a man meant, much less how to teach it. Guys watching sports together was a bonding ritual I’d seen, maybe we’d start there. At that age, Elliot had a beautiful kind of moment to moment, “What are we going to do now?” enthusiasm about everything. And when I told him that we were going to a Dodgers / Minnesota Twins baseball game, just us men, no mom, no sister – he beamed. 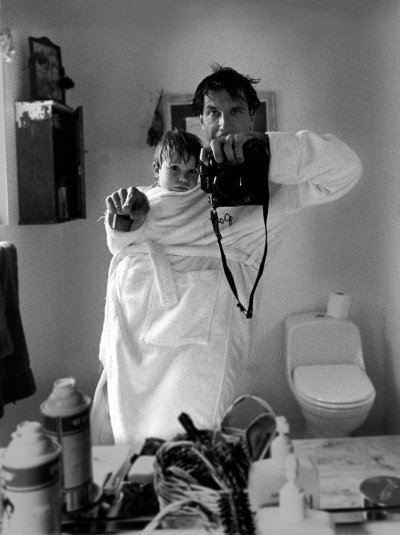 We arrived at Dodger Stadium on a warm June afternoon. Elliot was light enough to carry in my arms as we became part of the crowd moving through the turnstiles. I watched him soak up the sensations: the crush of the crowd; the crusty old men barking, “Get your programs here!”; the echoing voice of the game announcer over the PA system; the rich blend of food smells. And that spectacular moment when you see the field for the first time: the deep saturated green of the grass set against the reddish dirt of the infield, the pure white bases and foul lines, and the rainbow totality of the crowd.

Our seats were on the third-base line, about 10 rows up from the field. The left fielder was directly in front of us. Slightly to our left, above the outfield bleachers was a huge TV screen showing the game. Elliot couldn’t help but watch the screen, so every so often I would remind him that home plate was where the action was, down there, in the distance, to our right.

By the 5th inning, Elliot was losing interest. We’d indulged in every variety of junk food: popcorn, hot dogs, ice cream, peanuts, and as the temperature got hotter – a big Coke filled to the brim with crushed ice. It seemed like we had satisfied the requirements of male bonding, and I was about to suggest we leave.

That’s when it happened.

The Minnesota Twins batter smacked a high fly ball into left field. The higher the ball went, the more unmistakable was the curve in its path. It was going foul. It was going to land in our vicinity. Instinctually, all of the fans in our section stood up like a pack of predators focusing on prey. I stood; I could feel Elliott clutching my right leg.

The baseball reached its peak and was now on a trajectory back to earth, a tiny dark spec in the sky. Gravity pulled on the spec; it picked up speed and grew larger. And a reality dawned – that ball was coming right to me.

Time slowed. I could feel bodily contact around me, but it didn’t matter. I was in the perfect place to catch that ball, and no one was going to interfere with that. I let myself indulge in the possibility…no, the certainty… of catching that baseball. With my young son and 14,512 fans in the stadium watching, I would man-up, fend off the other dads, rise above the pack and claim the prize. That baseball would adorn a shelf in Elliot’s room for years to come, a symbol of masculinity and the extraordinary relationship he had with his father. “Yeah,” he would brag to his friends, “my dad caught that baseball at the first game we ever went to.” Wide-eyed, those boys would chorus, “how cool!” The closer the ball got, the more disconnected my thoughts: Maybe we could get the ball autographed! We’ll definitely get one of those glass boxes…Hmmm, I wonder if I should have brought my mitt.

My slow-motion reverie was rudely interrupted by two sensations of sudden, intense pain. The first was a shocking compression of my left thumb beginning at the tip and extending downward into my wrist.  The second came milliseconds later: a dull explosion on the upper part of my forehead….where my hairline use to be. I saw stars. The high-frequency part of my hearing vanished, as a muted cacophony of voices around me shared my pain, “Oh…oow!” And though I can’t swear to it, I thought heard a boy, somewhere close by, joyously exclaim, “My dad got it! My dad got the baseball!”

My senses began to return, and my first rational thought was, Oh shit, is this game being televised? Is it possible that 1 million people just saw me try to catch a foul ball only to have it carom off the tip of my thumb and smack me in the head?

My next thought was: Elliot. Did Elliot see what just happened? Have I lost all masculine credibility forever? I sank into my seat. This brought me eye to eye with my son. His face was filled with the utter joy of something really exciting having just happened… about which he had no concept. Thank God.

At this point, my left thumb sent me a memo requesting a meeting. It was swelling rapidly. I plunged it into the icy Coke, too embarrassed to make eye contact with any of the guys around me, the witnesses to my humiliation. Instead, I focused on Elliot. His sweet, adoring smile anchored me. His unconditional love was all I needed, all that mattered.

Moments later, the Twins catcher hit a double into right field. As he rounded first, I pulled my thumb out of the Coke, grabbed Elliot and, eyes down, made a B-line for the exit.

Elliot will be 27 years old on May 7th. We’ve both matured since that afternoon in Dodger Stadium. Over the years, I continued to drop the occasional pop fly. There came a point after which I couldn’t hide it. Didn’t try. Instead, I began to share my “mistakes” with Elliot; to talk about what I learned, what I was doing differently as a result.

This past Christmas, Elliot wrote in a card to me: “Dad, you are my hero. You make me want to strive to be the best me I can be. I have so enjoyed watching you grow in new directions over the past couple years. Thanks for making me who I am. I love you to the ends of the earth. – Elliot”

I’m considering getting one of those glass boxes and putting his Christmas card in it. Thank you Elliot for helping me to understand: To be a man is to have the courage to look foolish, and turn every “failure” into an opportunity “to be the best me I can be.”